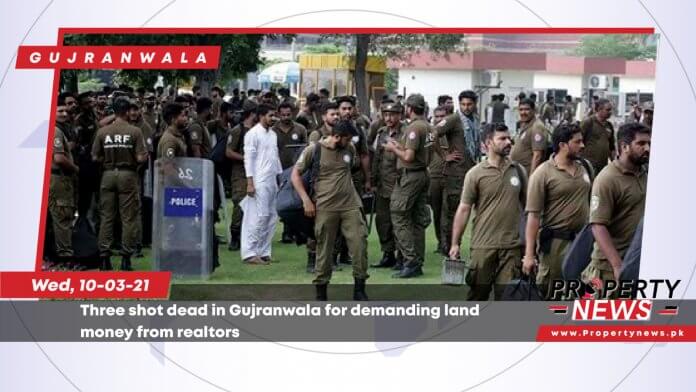 Gujranwala: According to a recent news report, three people who were seeking the promised money for their land from housing society owners were shot dead and five others were injured, according to reports. The police detained 52 people, including three of the Royal Palm Housing Society’s founders.

Ahmad Ojla, Usman Ojla, and Hassan Ojla made a bargain with some peasants to get a certain sum in exchange for the peasants giving them possession of the land for their housing society. They began construction work on the property without paying the landowners the promised fee. After a while, Ojlas had the land converted to their titles, allegedly with the help of revenue patwaris.

Peasants complained against the society’s owners several times, often to no avail. Hundreds of peasants were demonstrating outside the housing society owners’ office on Tuesday when the owners began beating them.

They then opened fire on the demonstrators, killing Rana Amjad (60), Imran (40), and Tanzeel (17) on the spot, and seriously injuring Ali Shan, Naeem, Adeel, Tahir, and Rana Nasir.

They were taken to the DHQ hospital for treatment. Hundreds of people, including women and girls, blocked GT Road after the incident by laying the bodies there.