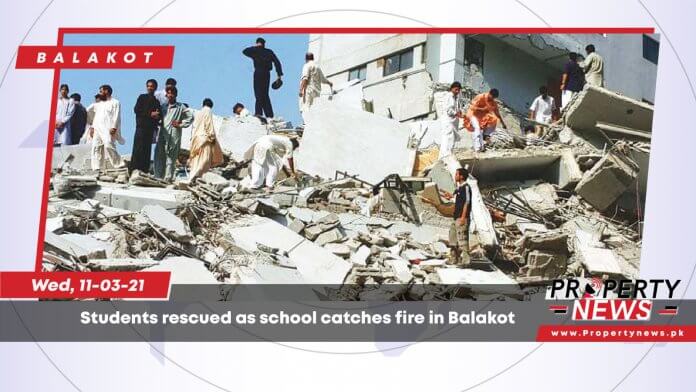 Balakot: According to a recent news report, when a prefabricated school building in Balakot caught fire on Wednesday, locals and merchants saved hundreds of pupils.

The fire, which started as a result of an electric short-circuit, caused residents to take to the streets to protest the Tehsil Municipal Administration Balakot, whose only firefighter has been out of commission for many weeks.

At the Islamia Modern High School and College, a fire broke out in one of the prefabricated classrooms, causing a stampede, and locals saved the students from the burning classrooms.

“When the fire broke out, members of the business community and locals raced to the scene and assisted the students in exiting their classrooms amid roaring flames,” Mohammad Tahir Raja, patron-in-chief of the trader’s body, told reporters.

The prefabricated building, he said, was built of wood and other flammable materials, and the fire soon consumed it. However, he said that the students were saved promptly as a result of concerted local rescue efforts.

“The fire was extinguished after a frantic hour-long struggle because the TMA Balakot fire tender was unable to enter the scene,” Raja said.

Hamid Khan, the Balakot Assistant Commissioner, told reporters that an investigation had been launched into the TMA, which he said had failed to put out the fires at the schools.

According to Azhar Naveed Khan, the Tehsil Municipal Official, a fire tender was dispatched to the scene after the incident and participated in the operation.