Reconstruction of GT Road demanded from Gujrat side 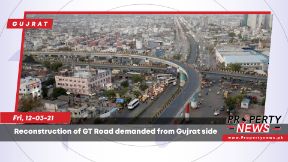 Gujrat: For more than a decade, the city’s citizens, mainly industrialists, have been concerned about the dilapidated state of the 14-kilometre old GT road that runs through it. About 2,000 industrial units line both sides of the lane, and hundreds of heavy vehicles drive through it every day. Along the road is also the city’s lone industrial park.

The two major entry points into the city, the Kathala railway crossing from Lahore and the Rehmania bridge from Islamabad, is the most dilapidated sections of the route.

In the last two fiscal years, the highways department carpeted a one-kilometer stretch on both sides of the dual carriageway from Ramtalai Chowk to the industrial area gate with money saved from other uplift schemes. The 8-kilometer stretch between the gate and the Chenab bridge, however, is still in poor repair, with big potholes near the Kathala railway crossing.

Travelling to the Shahbaz Sharif estate, a half-dozen private housing projects, and the campuses of several private universities and colleges in the area have become challenging as a result.