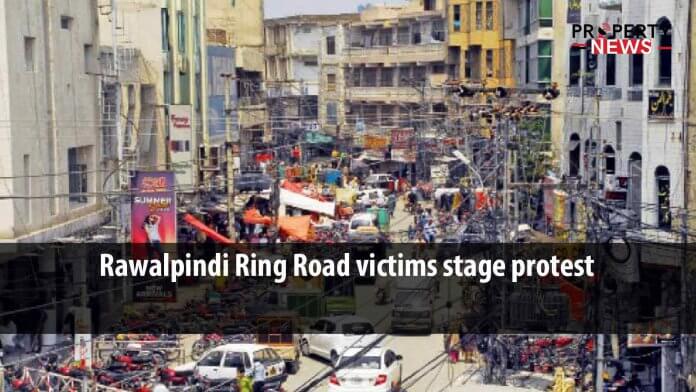 Rawalpindi: According to a recent news report, the people affected by the Ring Road project have staged a protest demonstration in front of the Commissioner Rawalpindi Division office on Monday.

The demonstrators believed that the government had altered the project’s map. Protesters and the district administration debated the price of land, but no agreement was made. They conducted a ‘sit-in’ in front of the Commissioner’s office before the complaint was filed.

Security officials declined to communicate with demonstrators and lawyers who wanted to meet with Commissioner Muhammad Mehmood. Protesters kept flags and placards in their hands and yelled anti-government slogans during the rally.

The Ring Road Action Committee (RRAC) President Syed Fayyaz Hussain Gillani along with some other people met with Additional District Collector Revenue (ADCR) Muhammad Shoaib but talks about the price of land ended without a decision. Harsh words were exchanged between protesters and ADCR during talks.

Malik Muhammad Altaf, Malik Muhammad Nadeem, Raja Aziz Kiani, Chaudhry Muhammad Javed, Malik Ibrar Hussain, Chaudhry Jahangir, and other protesters alleged that the government was snatching our property rather than buying it. For a one-Kanal plot of land, the Punjab government is offering us Rs. 150,000 instead of Rs. 2,000,000.