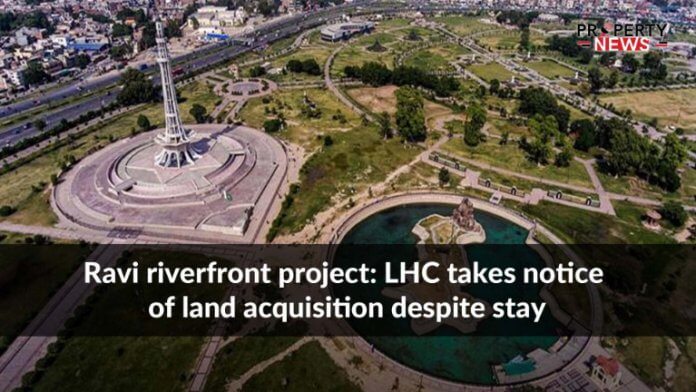 Lahore: According to a recent news report, the Lahore High Court (LHC) on Thursday took notice of the land acquisition for the Ravi Riverfront Urban Development Project despite a stay order and restrained the provincial government from any process till the Environment Impact Assessment (EIA) of the prime minister’s flagship initiative.

Justice Shahid Karim, who was hearing several petitions, pointed to media stories about a dispute between revenue officials and farmers and asked a provincial law officer why the land was being vacated for the project after a stay.

According to the law office, the land collector held a public hearing under section 9 of the Land Acquisition Act 1894.

The court had previously been informed that the notice given under section 4 of the Act for the purchase of the property had been revoked, according to the judge. He thought it was sad that the farmers were being mistreated.

Justice Karim ordered the government to postpone all land acquisition proceedings until the project’s Environmental Impact Assessment (EIA) is completed. He said that the purchase of people’s assets for the Orange Line Metro Train, a programme of the previous administration, had shattered their lives.

Justice Karim remarked, “Even a plot in DHA cannot be a replacement for a generations-old house in the old city.”