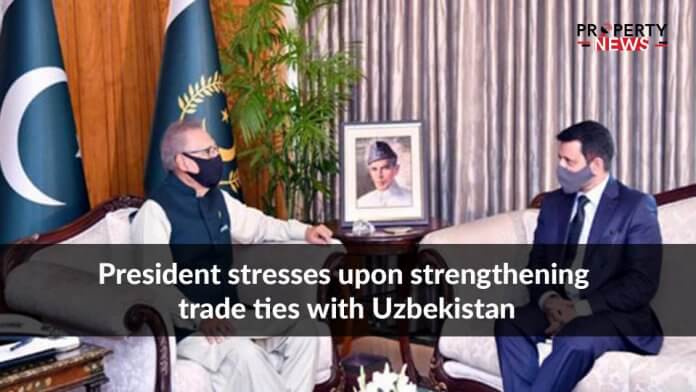 Islamabad: According to a source, President Dr. Arif Alvi has emphasized further strengthening Pakistan’s relations with Uzbekistan in all areas of mutual interest, including trade, economy, politics, and culture.

While conversing with Pakistan’s Ambassador-assign to Uzbekistan, Syed Ali Asad Gilani, the president said it was vital to construct political, monetary, and social relations with Uzbekistan and collaborate intently on issues of reciprocal significance, local turns of events, and global participation, particularly through the trading of undeniable level visits, parliamentary trades, and pastoral communications.

The president asked the ambassador-designate to put in his best efforts to promote economic and trade ties between the two countries so that exports to Uzbekistan can be increased. “Pakistan needs to diversify its exports to Uzbekistan by including manufactured goods, finished products, pharmaceuticals and services etc.,” he added.

The president highlighted that parliamentary cooperation was highly essential to further deepen bilateral relations and stressed the need for promoting parliamentary exchanges between the two countries.