Peace in Afghanistan is must for regional economic uplift: Asad Qaiser 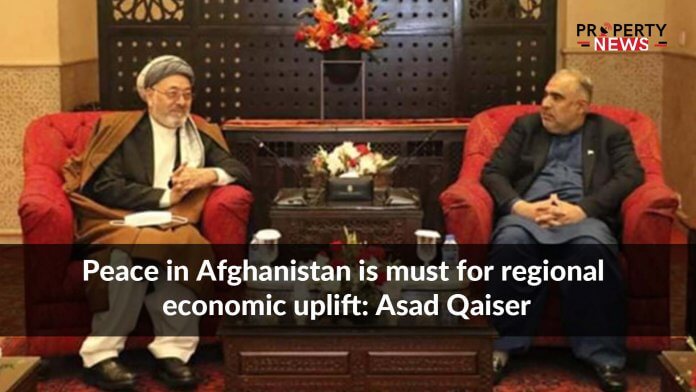 Islamabad: According to a recent piece of news, Asad Qaiser, Speaker of the National Assembly, said stability in Afghanistan was crucial for regional economic growth and communication, and Pakistan will stand firm with the peace process led by Afghanistan and owned by Afghanistan.

“Afghan peace process would be beginning of an era of peace and prosperity in Afghanistan and the region,” he said in a conversation with Afghan president’s special representative Omar Daudzai, who met with him in Islamabad along with a delegation. During the meeting, Thursday, Pak-Afghan relations and the political situation in the region and issues of mutual interest were discussed.

The speaker said Pakistan desperately wants a stable and sustainable Afghanistan that is in Pakistan’s and the entire region’s best interests. In addition to being neighbours and brothers, Pakistani and Afghan citizens have close historical ties, he said. He said the Afghan problem had no military solution. He said the liberalized visa policy would greatly benefit Afghan merchants, students and tourists, including patients.

Unique Representative Omar Daudzai said that Pakistan’s peace efforts in Afghanistan are respected by the government and the citizens of Afghanistan. He said that the Afghan nation values Pakistan for its support for the growth of infrastructure in their country, in particular for decades of hosting Afghan refugees.

He accepted that, through perseverance and commitment to permanent stability in Afghanistan, all parties to the peace process need to seek it. He accepted that not only Afghanistan would reap the benefits of stability, but the whole country.