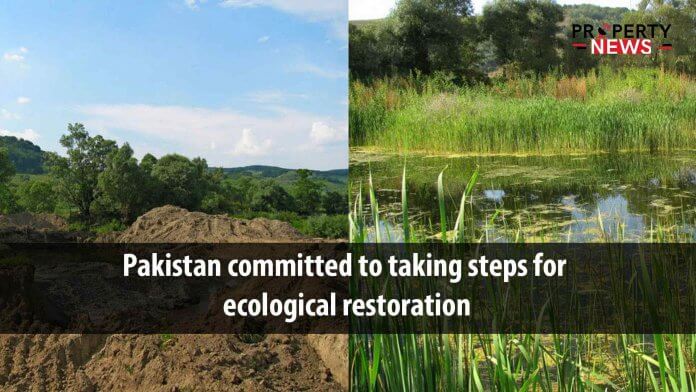 Islamabad: According to a recent news report, Pakistan is committed to participating in global steps being taken for ecological restoration through nature-based solutions, Special Assistant to Prime Minister Malik Amin Aslam said on Monday. The country is all set to host the United Nations’ World Environment Day 2021 this year on June 5.

All types of ecosystems can be restored including forests, farmlands, cities, wetlands, oceans, and restoration initiatives can be launched by almost anyone from governments and development agencies to businesses, communities, and individuals.

“Restoring ecosystems help not only protect but also improve the livelihoods of people, who are dependent on them. It also helps regulate disease and lessen the risk of natural disasters. Such restoration can also help us achieve all of the UN’s Sustainable Development Goals,” Mr. Aslam said while addressing a press conference on Monday.

According to him, Pakistan, like any other country, faces increasing levels of environmental destruction, which results in annual losses of billions of rupees to the national economy.

“Healthier ecosystems, with richer biodiversity, provide for greater benefits such as more fertile soils, bigger yields of timber and fish, larger stores of greenhouse gases. Thriving of the wildlife in natural environments and improvement in public health, poverty reduction and enhanced food security,” he said.

Between now and 2030, the global community plans to regenerate 350 million hectares of damaged terrestrial and marine habitats through a nature-based program such as the 10 Billion Tree Tsunami Program and the Protected Areas Project, which are the country’s biggest afforestation initiatives.

For more news and updates, visit our website Property News.