Over 170 housing societies outlawed in Peshawar for violating PDA guidelines 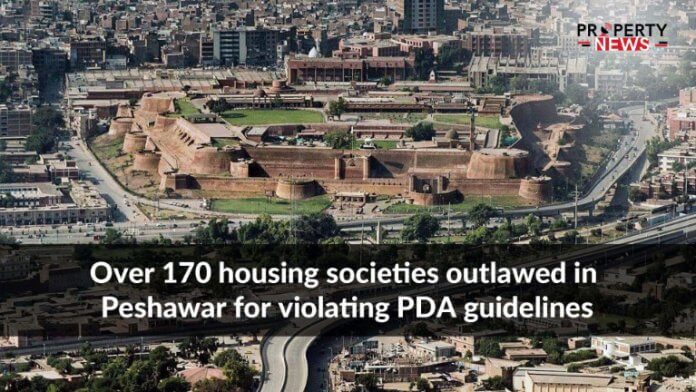 Peshawar: According to a recent piece of news, on Wednesday, the district administration, has banned 181 housing societies in Peshawar for violating the guidelines and regulations of the Peshawar Development Authority (PDA).

According to Syed Zafar Ali the Director General (DG) of the PDA, stated that these schemes were banned for not following the guidelines of the PDA Private Housing Scheme Regulations, 2019. The DG also stated that the concerned officials had served numerous notices to the societies. Also adding that legal measures have been initiated against the violators. He added that the ban will not be lifted until the requirements mentioned in the regulations are met.

The neighbourhood breakdown of these schemes are as follows:

According to the official notice given by the district administration, stated that due to the increasing number of illegal housing projects, the concerned authorities have called for the strict execution of laws to initiate legal proceedings to reduce the spread of these unlawful societies. It was also revealed that the authority has recommended the banning of all sorts of land transfers, mutations, and registries in unregistered housing societies until the developers have obtained a no-objection certificate (NOC).

The DG said that the illegal housing societies were not proving any sort of proper facilities to the residents of the societies, which included greenbelt, parks, land for schools and mosques etc. This led to issues between residents and society owners.

As per the law, the societies are required to provide land for ‘all basic facilities including sanitation, drinking water, natural gas, electricity, proper roads and public parks etc.’ Besides, a land area of minimum 100-Kanal is required for the development of a housing project and 7% of the lands shall be reserved for open spaces or parks, 2% for the graveyard, 5% for commercial and 5% for public buildings.

For more updates and information, visit our website Property News.