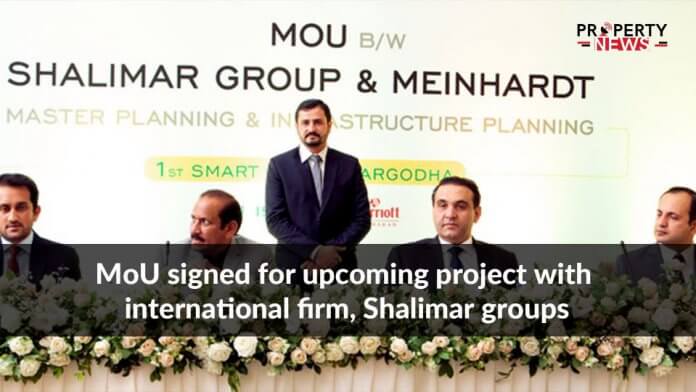 Lahore: According to a news reported on 20th of January, the Shalimar Group of companies has signed an MoU with Meinhardt Group, an international firm located in Singapore. The MoU has been signed between the two companies for an upcoming project.

Shalimar Group of Companies has signed this contract in an attempt to bring some of the world’s most gifted architects to work on their upcoming real estate project called the ‘Shalimar Smart City’. A ceremony was held on the 15th of January Elysium at Marriot Hotel. The ceremony was attended by prominent industry figures, foreign delegates, native business community and media. It was highlighted during the event proceedings that this would be the first smart city of Sargodha.

The Chairman of Shalimar Group of Companies, Mr. Malik Khizar Hayat addressed the event and explained how the project came to be. He stated that “‘My vision to reality, a journey of 30 years. Shalimar Smart City, a hub of smart features pioneering in Punjab is a considerable and substantial residential project established on international housing standards. We are going to enhance advancements in the lifestyle of locals of Sargodha. Shalimar Smart City is also a project for the housing Investors throughout the country.”

For more information on this project, visit our website Property News.