Mansehra: Students of demolished schools attending classes in the open 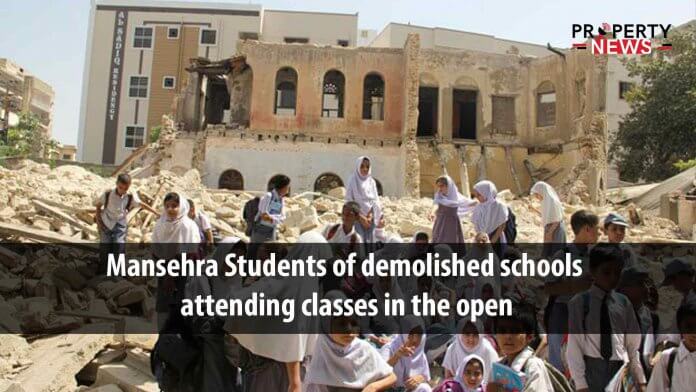 Mansehra: According to a recent news report, the students of two government schools have been attending classes in the open for the last one year due to the destruction of the buildings by WAPDA for constructing a road to link the Dasu hydropower project site with Kamila town.

“The WAPDA demolished the two school buildings but refused to restore them in a suitable alternate venue, so the management is forced to conduct classes under the open sky,” citizen Maulana Waliullah Toheed told reporters in Dasu, Upper Kohistan’s district headquarters, on Monday.

He said the WAPDA had grounded the Government Primary School and Government High School in the Suo region because their buildings were in the way of a road being constructed to link the 4200-megawatt Dasu hydropower project with Kamila city. He was accompanied by a group of locals.

“The WAPDA had signed an agreement with the education department for the construction of both buildings at an alternative piece of land. One year has passed to it but the WAPDA has yet to fulfil commitment forcing students to get an education in the open,” he said.

Locals met with local lawmakers and administration to urge school reconstruction, but to no avail, according to another resident, Ahmad Nabi.

If the rebuilding of school buildings is postponed, citizen Khursheed Ahmad believes the WAPDA should have prefabricated shelters for classrooms, students, and other employees.