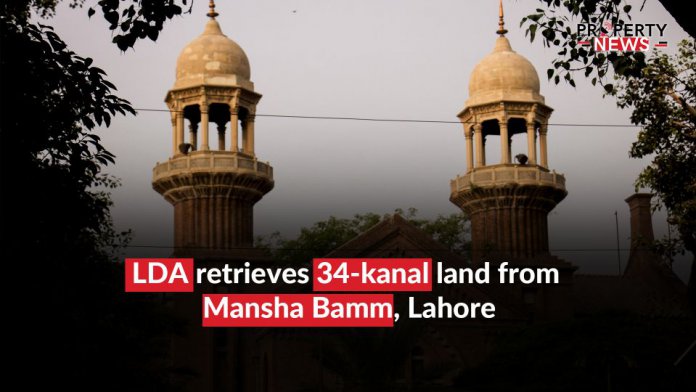 Lahore: According to a recent piece of news, the LDA team has been able to retrieve 34-Kanals of land from Mansha Khokhar alias Mansha Bamm in an operation held on Tuesday night.

The unit, headed by LDA town planning officials and police, arrived at PIA Road near Johar Town’s D/2 block and conducted a big operation to demolish the illegal building on state land that the men of Mansha Bamm were allegedly occupying.

All buildings were dismantled, and those who were renting the property were evicted. A lawsuit was also filed by the LDA team against Bamm, his sons, and 25 other citizens for illegally occupying 34 Kanals of state territory.

There was also a camp office set up by the authority. In addition to the LDA, workers from the Water and Sanitation Department and the Lahore Waste Management Corporation were posted at the office to collect and address public concerns about cleanliness and sanitation. The land grabbers, on the other side, restored buildings on a portion of the site, prompting the LDA to restart the operation.