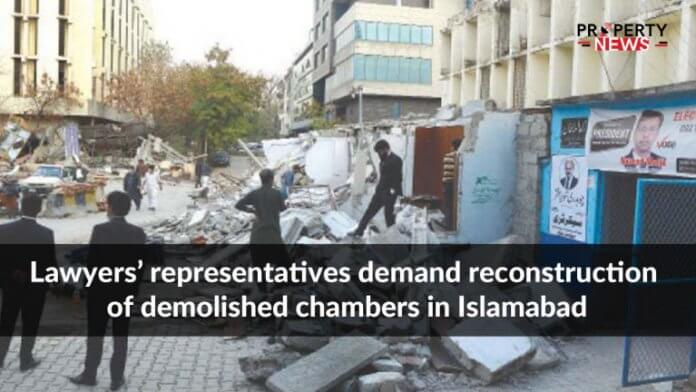 Islamabad: According to a recent news report, the Representatives of lawyers’ associations on Saturday demanded reconstruction of chambers demolished by the Capital Development Authority (CDA) and the district administration in an anti-encroachment operation.

According to Raja Aleem Abbasi, member of the Islamabad Bar Council (IBC), Mr. Afridi excused from participating in the convention due to an ailment, but he was represented by Advocate Sheerin Imran.

The lawyers demanded immediate transfer of District and Sessions Judge Islamabad (west) Tahir Khan and the constitution of a Joint Investigation Team (JIT) to identify those responsible for demolishing the chambers.

Moreover, they demanded the withdrawal of the notification issued by the CDA to the occupants of illegally established chambers and said the lawyers may be allowed to use the chambers until the construction of a complex for them.

Following the Feb 8 anti-encroachment drive, a large number of lawyers stormed into the IHC, attacked the Chief Justice Block, and detained him as well as other judges for a couple of hours.