Lahore: Nawaz shared out 1,352 plots to favourites illegally according to CM Buzdar 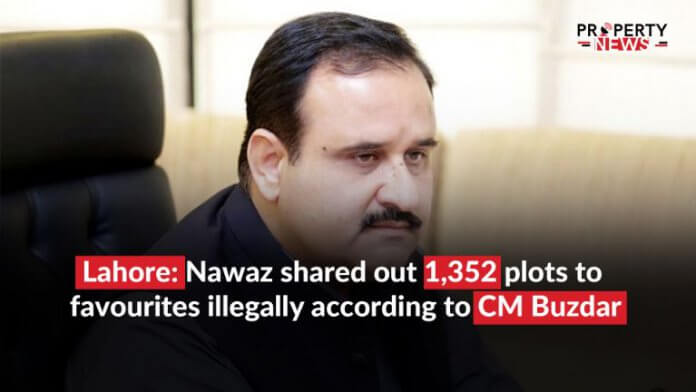 Lahore: According to a recent news report, the Punjab Chief Minister Usman Buzdar has accused former ex-prime minister Nawaz Sharif of illegally allotting thousands of plots worth billions in Lahore to his party MPs and favourites, even violating his discretionary quota as provincial chief executive back in the late 1980s.

His allegations were based on a lengthy report given to him by Director-General Gohar Nafees of the Punjab Anti-Corruption Establishment. On Thursday, CM Buzdar held a press conference at the chief minister’s secretariat, where he also gave a presentation titled “Plot Politics of the PML-N: A Case of Nepotism and Political Patronage.” However, present and retired Lahore Development Authority officials denied CM’s claims.

He reported that Nawaz Sharif had allotted over 2,000 plots and that investigation into the matter had been swept under the rug for years. Raja Ashfaq Sarwar, a former provincial minister, was given 14 plots, according to him. He said that the government displayed bravery by bringing these illicit acts to the attention of the people.

Mr. Akbar said that the PTI government will now pursue the recovery of plots and fines and that former Prime Minister Nawaz Sharif and former LDA officials would face legal action. He also mentioned that anyone who had been assigned plots would be reimbursed.