Kohat: Rs. 3 billion released for furniture at KP schools, according to minister 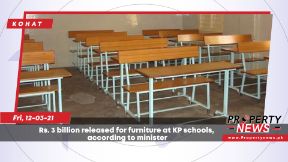 Kohat: According to a recent news source, Shahram Khan Tarakai, the Minister of Elementary and Secondary Education in Khyber Pakhtunkhwa, announced that the government has set aside Rs3 billion to provide furniture to 900,000 students in schools throughout the province. He stated that the government’s top priority was to provide basic facilities at schools in remote areas.

According to the minister, the government has set aside Rs. 130 million for education in the current fiscal year and attempts are being made to introduce new technologies and smart schooling programs.

He promised to support the Garrison Cadet College to keep up its services to cater to the needs of the armed forces and medicine, engineering, and other fields. Mr. Tarakai advised the cadets to focus all their energies on education. In his speech, the principal said that lacing the students with excellent education was the manifesto of the college.