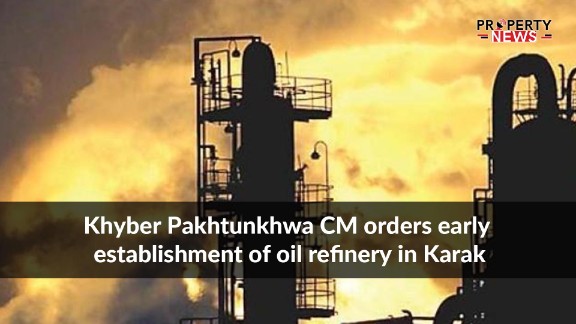 Peshawar: According to a recent news report the Chief Minister Mahmood Khan, has given orders to the concerned authorities to take certain steps to implement the proposed project of setting up of an oil refinery in Karak district, saying all necessary matters, including identification of a suitable site and land acquisition, should be finalized as soon as possible.

According to a tweet, the chief minister said that all departments’ roles and obligations in this regard should be clearly defined. He described the new project as “critical” to the province and stated that the provincial government would have all the necessary support to see it through.

He was recently chairing a meeting at the Chief Minister’s House in Karak to discuss the construction of an oil refinery. The meeting was attended by provincial minister Akbar Ayub, secretary of energy and power Zubair Khan, and other related officials.

The participants addressed the project’s success so far and the next steps. It was reported that two separate locations for the oil refinery were being considered. The chief minister ordered that the project’s site selection process be completed as soon as possible, and that appropriate steps be taken to buy land so that real work on the project would begin.