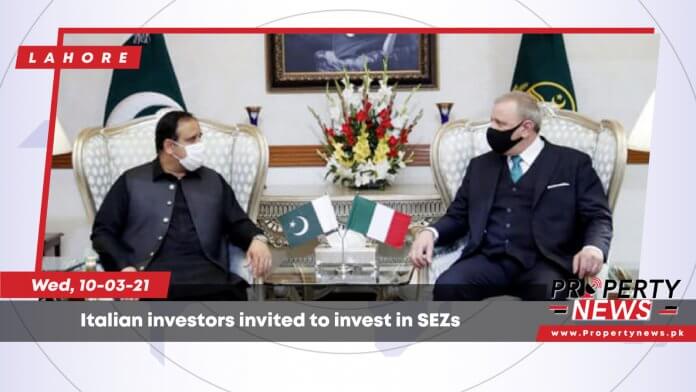 Lahore: According to a recent news report, the Punjab Chief Minister Usman Buzdar held a summit with the Italian Ambassador Andreas Ferrarese during which he extended an invitation to the Italian investors to invest in the special economic zones (SEZs) in the province.

The CM confirmed that seven SEZs have already been informed and that 13 more SEZs will be created, according to the details revealed. He told the Italian ambassador that investors involved in SEZs will be given the best possible treatment. He went on to say that Pakistan and Italy have strong ties and should exchange trade delegations to strengthen them.

The Italian ambassador agreed that a favourable market climate had been developed and expressed Italian businessmen’s interest in investment opportunities that would extend cooperation with the Punjab government.

In addition, the chief minister said that new tourist attractions are being created, and the Walled City of Lahore Authority (WCLA jurisdictions) has been extended to include the entire province. According to him, the walled city is being returned to its former glory.