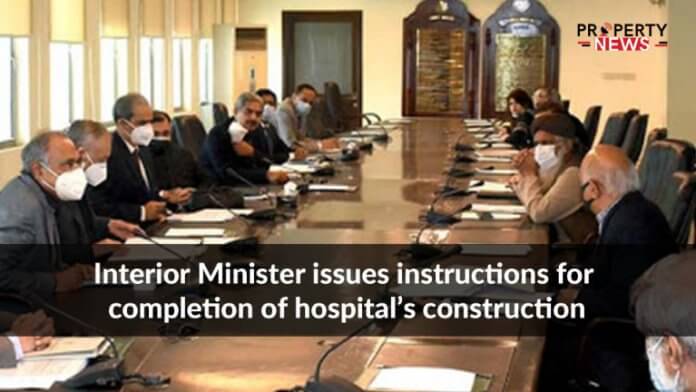 Rawalpindi: According to a recent news report, the Federal Minister for Interior Sheikh Rashid Ahmed on Wednesday issued directions to complete construction of Mother and Childcare Hospital (MCH) on Asghar Mall Road within two months while rejecting the time frame of six months of the contractor.

During his surprise visit to the construction site, Mr. Ahmed said Prime Minister Imran Khan would also visit the hospital to review the progress of work in March as he wants to complete it as soon as possible so people could benefit from the project.

Accompanied by Federal Parliamentary Secretary Sheikh Rashid Shafique, he said the government will not tolerate any negligence on the quality of work, adding, funds have been provided and the administration must complete work on the hospital’s construction as it is meant to facilitate the common man.

Along with 17 state-of-the-art operating theatres, there will be space for 200 beds. The project’s total cost is Rs 5.2 billion. Machinery, operating equipment, and elevators have arrived, and free treatment will be provided to women and children. A hostel has also been built alongside the hospital. Almost 20% to 30% of the work is left.

The hospital will be functional while operation theatres will also be operational from May. Mr. Ahmed said apart from the Rawalpindi district, citizens of Jhelum, Attock, Chakwal, AJK and Khyber Pakhtunkhwa will also be able to benefit from its establishment.