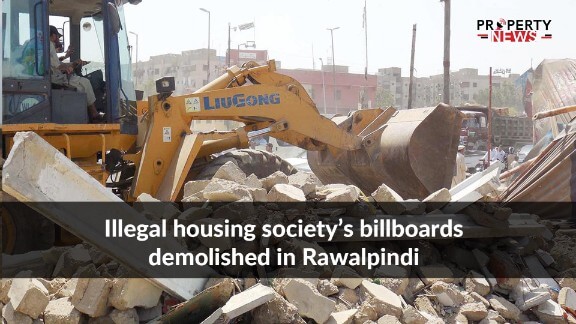 Rawalpindi: According to a recent news report, the Metropolitan Planning and Traffic Engineering (MP&TE) Directorate of Rawalpindi Development Authority (RDA) on Saturday conducted an operation against unauthorized housing scheme Silver City on Girja Road and demolished barrier, billboards and roadblocks.

Read More: Strict orders to be taken against illegal housing schemes in Rawalpindi

According to MP&TE Director Shahzad Haider, a notice has been given to the owner of the illegal housing scheme under section Punjab Private Housing Schemes and Land Subdivision Rules 2010.

The RDA’s staff, including the deputy director of Building Control, building inspectors, among others, took part in the operation against the housing scheme. In breach of the Punjab Private Housing Schemes and Land Subdivision Rules 2010, the owner of this property was operating an unlawful housing scheme.

RDA Spokesman said the RDA director-general had advised the citizens that in their interest they should not make any investment in any housing scheme which had been declared illegal by the authority. They are further advised to check the approval status of each plot and building before purchase, agreement and booking from the MP&TE Directorate RDA.

RDA suggests the citizens consult the RDA before investing in such projects as the civic agency will not be responsible for their losses, he added.