Gemstone dealers take to streets against illegal mining in Swat 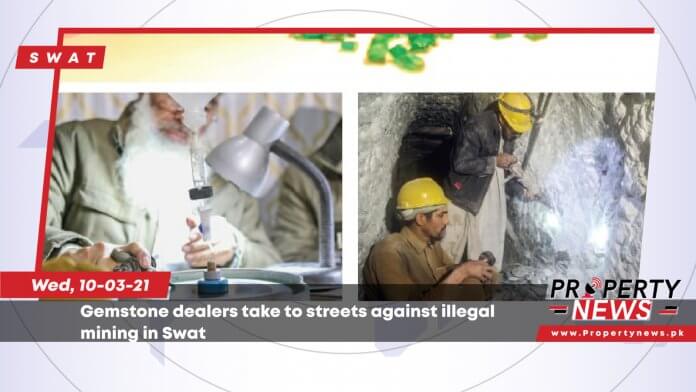 Swat: On Tuesday, a large number of gemstone dealers took to the streets to protest illegal mining in the Swat emerald mine, alleging that officials from the mines and mineral departments were involved.

Protesters gathered in front of the local gemstone store, chanting anti-government slogans. Junaid Afrin, president of the Swat Gemstone and Merchant Association, led the rally, which drew over 100 dealers. They also took a stroll through Mingora Bazaar.

The protesters said that the lease of the largest emerald mine had expired five months ago but the contractor was still busy mining illegally.

Read More: Local management to work on the restoration of Swat Valley: DC

The protesters claimed that the contractor was illegally mining with the assistance of some miners, while thousands of other workers and dealers had been out of work for the previous five months. They said that the department had issued new regulations that favoured the previous contractor.

They demanded that the government investigate illegal mining and prosecute those who were involved. They also said that the department had given the Shamozo emerald mine an illegal contract.