Forests along the Rawalpindi Ring Road to be protected 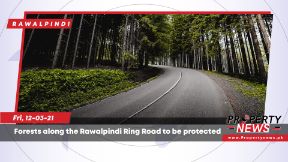 Rawalpindi: According to a recent news report, forests along the path of the Rawalpindi Ring Road will be mapped, according to Commissioner Rawalpindi Mohammad Mehmood, so that measures can be taken to completely secure them during the project’s implementation.

He announced that starting this spring, the forest department would provide Rs. 2 per plant to farmers to increase forest cover. Furthermore, free plants will be given to the departments of education and health, as well as the armed forces.

When presiding over a meeting of the Divisional Agriculture Advisory Committee, he said this. Officials from the agricultural extension, forestry, fishing, and other agencies joined the conference.

He stated that the forest department has set goals for planting trees on public and private property, and that progress is being monitored.

According to the commissioner, data on the cultivable area in the Rawalpindi division will be collected for the past 20 years, and information on each crop will be checked. A study will be performed regularly to assess which crop’s production area has declined or increased.

He claimed that the region under cultivation of certain crops had declined dramatically and that these factors would be analysed using 20 years of evidence, accompanied by routine preparation.