Entrance to Pakistan Monument closed from Srinagar Highway side for years 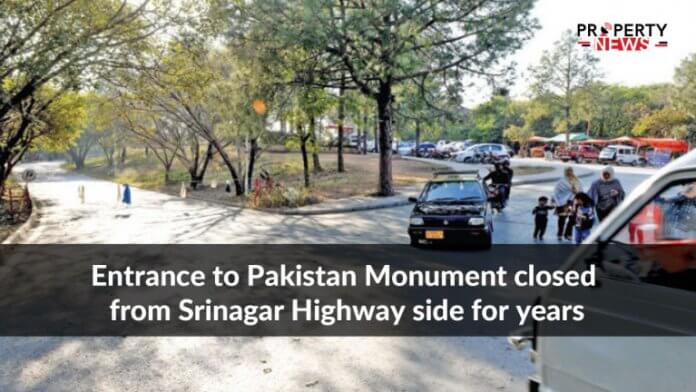 Islamabad: Every day a large number of people reach the gate from Srinagar Highway only to know that it is closed. They then take the Aabpara or I-8 side to reach the monument via Garden Avenue. Near the entrance to the monument, the visitors face gridlocks, especially on the weekends, as the road is being used for parking and the motorists have to use the reverse gear and go back from the same road.

While another road to the monument which is supposed to be used for exit is also closed as it is being used for horse and camel riding. However, during the arrival of “special guests, VIPs and officers”, the road is opened, said a security guard.

The Directorate of Municipal Administration (DMA) had awarded the agreement to collect the entry fee almost a decade ago against Rs5 million, which expired in 2015. Since then, the contract has not been renewed rather the DMA extends it every year with a 10pc increase.

“Pakistan Monument is a national asset and every citizen has the right to visit it. Normally, a single ticket of Rs20 does not matter but when families from poor background come here they have to purchase tickets for everyone,” said a security guard.

A CDA official said DMA was a resourceful department. “Collection of almost six to seven million annually is a small deal for the DMA so there will be no big loss if we it abolishes the entry fee. But the DMA cannot take such a decision without the involvement of the Metropolitan Corporation Islamabad (MCI),” the official said.