Dumping of debris in green areas ignored by CDA 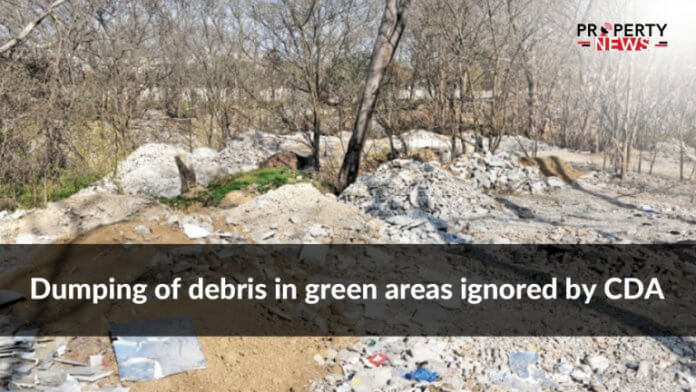 Islamabad: According to a recent news report, contrary to the spirit of its tree plantation campaign, the Capital Development Authority (CDA) has turned its back on dumping debris of demolished houses on greenbelts and open areas in H-8 by private contractors.

There is considerable greenery in the industry along with open land, but private contractors have dumped the garbage therein to ruin the area’s beauty. Previously, contractors used to throw debris along this sector’s nullahs, but recently they began throwing debris in the open areas.

During a visit to the site, Dawn noticed that in front of H-8 Commerce College, there is a newly dug road, leading towards Zero Point and hardly 400 feet away from the college where piles of debris have been dumped.

“On the one hand, we are focusing on tree plantation and the other, we failed to stop dumping of debris in the greenbelt,” said a CDA official. Piles of debris can also be seen dumped along I.J.P. Road and in nullahs of the city.

The official said earlier there was a timber mafia, land mafia and now a debris mafia is also emerging. According to CDA rules, the building control section was the authorized department to approve the demolition of old houses and reconstruction of new ones.

In most cases, civil agency officials said that owners who ignored their original approved building plans would not carry the problem of new construction into the CDA notice to prevent fines and penalties.

However, these businesses later dump garbage into abandoned areas due to incompetence or participation in the environment wing. Climate Director Akhtar Rasool, when contacted, said that he would look into the matter.