Court authorizes FIA, CDA to proceed against hospital in the case of encroachment 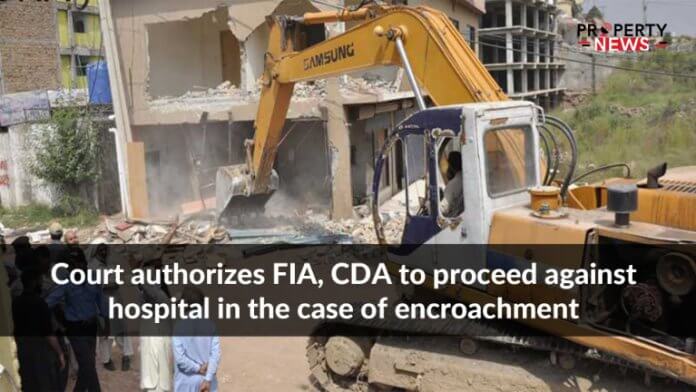 Islamabad: According to a recent news report, the Islamabad High Court has authorized the Federal Investigation Agency (FIA) and the Capital Development Authority (CDA) to continue against a private hospital for allegedly encroaching state land. The court dismissed the petition filed by Shifa Hospital against the inquiry/investigation initiated by FIA in connection with the construction of a medical college on encroached land.

The petitioners’ counsel had fought that the solicitor had built the structure as per the endorsed plan and had not submitted any lawlessness. Though, minor abnormalities were concerned, the advice said, they could be regularized by the CDA.

On the other hand, Assistant Attorney General Saqlain Haider, assisted by the FIA officials, contended that the agency had initiated the formal inquiry following the law and had issued notices to the petitioner to provide record and necessary information.

The counsel for the respondent, CDA, had contended that as the petitioner had violated the terms and conditions of the allotment as well as other by-laws of the civic authority and had also encroached upon government land, show-cause notices were issued.

The FIA had submitted that the source report was received wherein it was mentioned that the petitioner had raised the medical college building on the illegally-occupied land of the CDA in connivance with the officials concerned.