Balloting for allotment of houses completed in Hazro 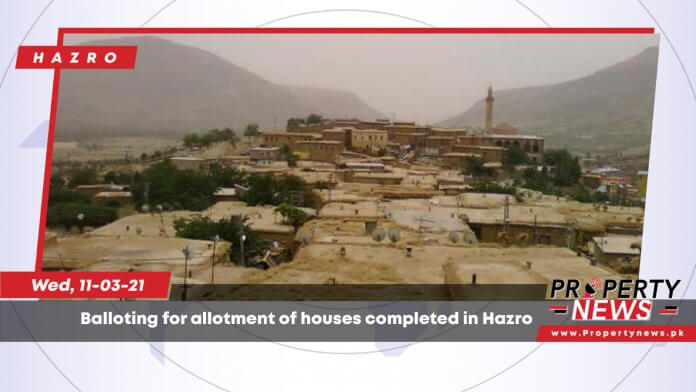 Taxila: On Wednesday, the first draw for houses under the Naya Pakistan Housing Project (NPHP) was held in Hazro. Mian Mehmood ur Rasheed, Punjab Minister for Housing, Urban Development, and Public Health Engineering was the chief guest at the NPHP’s first balloting.

The housing scheme covers 400 Kanals and comprises 587 plots, with 187 plots measuring five marlas each and 400 plots measuring three marlas each. In the colony, there will be a park, a walking track, and a shopping area with 38 shops. With a budget of Rs. 37.9 million, the project will be completed.

Mr. Rasheed, speaking at the ceremony, said the government’s proposal to build five million houses had brought hope to the poor. He said that PTI vowed to provide low-cost housing to homeless people in its election manifesto and that voting for the houses was a step toward making that pledge a reality. He mentioned that necessary legislation is being drafted to provide loans to citizens.

He reported that the Rural Housing Pilot Project would be launched in Okara, Kasur, Sheikhupura, and Jhang villages.

Work on a similar project in Attock, for which 700 canals of land have been purchased, will begin soon, according to PTI Punjab spokesperson and District President Qazi Ahmed Akbar. A state-of-the-art trauma centre, as well as an e-library, will be established at Tehsil Headquarters (THQ) Hospital Hazro, for which Rs. 7.5 million has been set aside.