230 houses destroyed in a blaze in Thar town 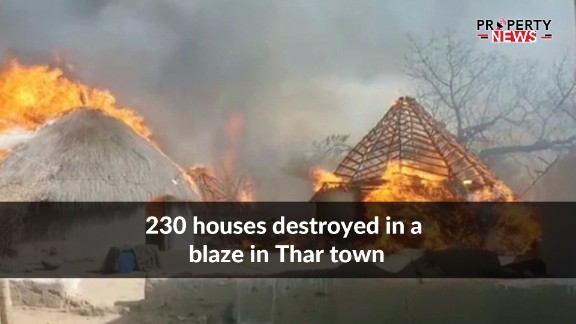 Thar: According to a piece of recent news, a devastating fire that engulfed an entire locality in Khensar town within no time on Saturday destroyed as many as 230 houses and other structures. The fire was believed to have broken out in the kitchen of some house quickly spread to neighbouring houses in Bajeer locality of the tiny desert town.

Read More: More resorts to be constructed at Thar

Azeem Bajeer, Abdul Rauf, Badal Bajeer, Bilawal, Abdul Rahim, and other fire victims told journalists that they had alerted district administration officials and requested that fire tenders be dispatched to put out the fire as soon as possible after it broke out, but that most of the houses had already been burned by the time the fire tenders arrived.

According to them, the fire destroyed valuables, gold ornaments, currency, and stocked grain, as well as burning alive several cattle heads. They lamented, “The blaze has leftover 2,000 villagers homeless in one of the most destructive fires in Tharparkar’s history.”

They have said that a number of people were burned while attempting to put out the burning flames and save their belongings. They requested fair restitution for the catastrophic injuries they had suffered as a result of the crash.

He requested that a report be conducted to determine the damages and that the fire victims be adequately compensated.

Facebook
Twitter
Pinterest
WhatsApp
Linkedin
Previous articleBuilders, dwellers in a fix over ban on housing societies by PDA
Next articleBesant Hall set to serve as art and cultural complex